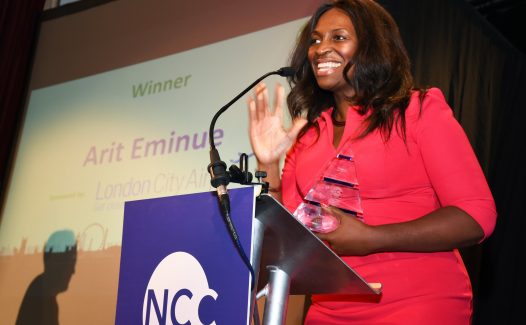 DiVA is pleased to announce that its Founder and Director Arit Eminue has won Business Person of the Year 2016 at the Newham Chamber of Commerce Business Awards.

Sponsored by London City Airport, The Business Person of the Year category honours business leaders who have demonstrated leadership and motivational ability along with innovation and creativity in running and developing their business.

“It was a surprise and honour to win the award,” said Arit. “I may be at the top of the food chain at DiVA, however, beside me stand an incredible team who work hard to make our company vision a reality. I couldn’t do what I do without them.”

The winners were announced at a ceremony attended by MPs Lyn Brown and Stephen Timms, the Mayor of Newham, Sir Robin Wales, and councillors. Sponsors included McDonalds, the London Borough of Newham and London City Aiport.

Liam McKay, Head of Public Affairs, London City Airport said: “DiVA is a business that’s dynamic and a business that’s led by someone that’s committed to supporting businesses to grow through apprenticeships and helping the boroughs young be all they can be.”

John James, Executive Secretary of the Newham Chamber of Commerce said, “with 7,500 new businesses being established in Newham during the last five years, adding to an already increasingly thriving commercial base, there are pearls of excellence worthy of the community’s attention.”

Arit founded DiVA out of a passion to work in partnership with employers to ensure people from diverse backgrounds were given opportunities that they might otherwise not have had access to.

Through Government backed Apprenticeships and Traineeships, DiVA has supported over 500 people into creative jobs with employers including Universal, UK Music, All3 Media, Warner Music, Southbank Centre, the CBI, and many more. DiVA was the first independent training provider in London to be awarded the Creative Skillset Tick in recognition of the outstanding training they provide. Over 90% of DiVA Apprentices’ secure employment with their host employer post apprenticeship.