Straight answers to straight questions from some DiVA apprentices. 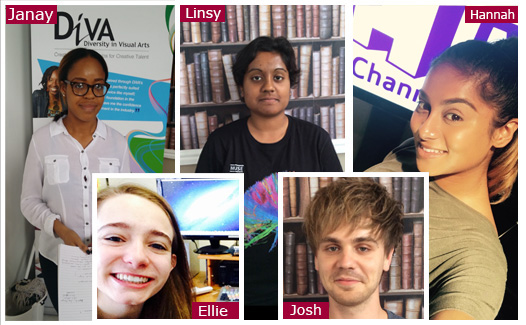 DiVA Apprentices Ellie Gentle (All3 Media), Linsy Varatharasan (Domino Records), Hanaa Coan Ali (OHTV) and Janay Marsh (Chelsea Apps) come together to talk about their experiences as apprentices in some of the top companies in the media sector.

Ellie Gentle: Prior to getting this job, I did the DiVA Get Creative! Traineeship programme where I got to work in TV production. I got this apprenticeship straight afterwards and it’s given me opportunities in the industry that I’ve never had before.

Hanaa Coan-Ali: I love my job at OHTV because every day is different; I’m not behind a screen at my desk 24/7.

Janay Marsh: The best thing is the variety. It’s fun, never boring, never the same and always exciting. I enjoy who I work with and really like the atmosphere.

Linsy Varatharasan: I’m dealing with things I’ve never had to face before and I really enjoy the challenge that brings.

Ellie Gentle: I’m involved in the technical side of the business, talking to production companies and producers, making sure we have the correct paperwork for our programmes. I also help keep our website up to date.

Hanaa Coan-Ali: No two days are the same! Since being here I’ve produced programmes, interviewed celebs on the red carpet, photographed at festivals, been on TV, done TV voiceovers, the list goes on…

Janay Marsh: My role is really varied. The company is expanding, so at the moment I’m helping co-ordinate the move to a new office space, in addition to day to day admin tasks including attending team meetings, organising external meetings, responding to emails, taking calls from clients. I love it!

Linsy Varatharasan: I am currently working with MCPS on a mini label called Geographic that Domino own. My role involves analysing the sales data so we can track performance of albums etc.

If you had decided against an apprenticeship, what would you be doing now?

Ellie Gentle: Before I met DiVA I was going to do a college media related college course, but doing the traineeship and then the apprenticeship has been much better.

Hanaa Coan-Ali: If I had decided against my apprenticeship with OH TV, I would probably still be at college studying Musical Theatre.

Janay Marsh: I would probably be doing another office job but not have the advantage of acquiring the Level 3 Qualification and it wouldn’t be as fun as I have at Chelsea Apps.

Linsy Varatharasan: I would probably be temping in any sort of office environment still trying to get a job in Music.

Hanaa Coan-Ali: I would encourage anyone who is serious about their career and have an idea of where they’re going to complete an apprenticeship. At 17/18 there’s no better place for you to gain real industry knowledge and experience.

Where are they now?

Ellie Gentle was offered a full-time job by her employer TV Production company All3 Media makers of hits including Hollyoaks, The Only Way is Essex and Undercover Boss.

Hanaa Coan Ali completed her Press Assistant Apprenticeship at multi-award winning OHTV, the UKs leading TV Production company for Black, Asian and Minority Ethnic communities. She progressed into a full-time job at VEVO where she works in editorial as an online editor.

Linsy Varatharasan completed her apprenticeship as a Royalties Assistant at top record label, Domino Records home to artists such as Arctic Monkeys, The Kills, Franz Ferdinand, and Animal Collective. She then progressed into an internship at Universal Music before moving onto a Level 4 Apprenticeship in Business and Professional Administration.

Janay Marsh was offered a job as a Business Administrator with her employer Chelsea Apps factory, who make apps for KPMG, EDF Energy, Waitrose and Ladbrokes.